Averaging 40,000 to 50,000 square feet, not located at an intersection, and may have
inconvenient curb cuts.

These centers are typically too small to accommodate a supermarket anchor, and too large to
be filled with the typical convenience stores that would succeed in a small space (i.e. dry
cleaners; sub shop; pizza restaurant).

Inconvenient curb cuts that frequently plague properties are where the visibility of the curb is
blocked by a curve in the road, a building blocking, or too many cuts that make it hard to identify
which entrance it is, resulting in the consumer passing by.

The problem arises when retailers generally refuse to lease the second-story, claiming
consumers are too lazy to walk up stairs, which puts the developer in the position of designating
the upper floor for office space.

This all sounds very logical, although, problems can arise in attracting tenants for either level.
The fear is that office tenants will clog the parking lot every day, inconveniencing shoppers and
decreasing sales. 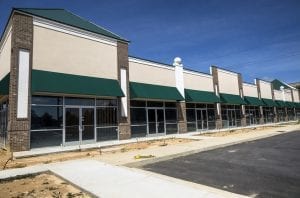 This center can be built with great exposure, architecture, and attractive landscaping and
signage. The problem is that there is either not enough population, or too much competition,
rendering the center unoccupied.

The only effective way to discover if a center is necessary is to pre-lease it. If tenants can not be
secured before the center is built, it doesn’t need to be built. Many financial institutions require
that substantial pre-leasing take place before construction loans are even grants.

The Center With Too Little Parking.

Convenience-oriented centers can usually work if four rows of parking are provided between the
storefront and the street, which creates a setback of about 160 feet, although, sometimes only
two rows are necessary.

Another key consideration is the issue of employee parking. It is argued that the spaces in the
back are best suited for employee parking. Unless the developer writes leases that require the
tenants to force employees to park in the rear, the employees will park in the front, as close to
their store’s front door as possible—gobbling up spaces that should go to shoppers. Further
complicating this issue is the fact that most retailers would prefer that their personnel enter
through the front door so as to curb the pilferage that may result from employees entering or
exiting through a rear door.

Our Hours
Mon-Thurs: 9 am to 5 pm, Fri: 8 am to 12 noon
*Appointment only. Please call ahead before visiting as we may be at a job site